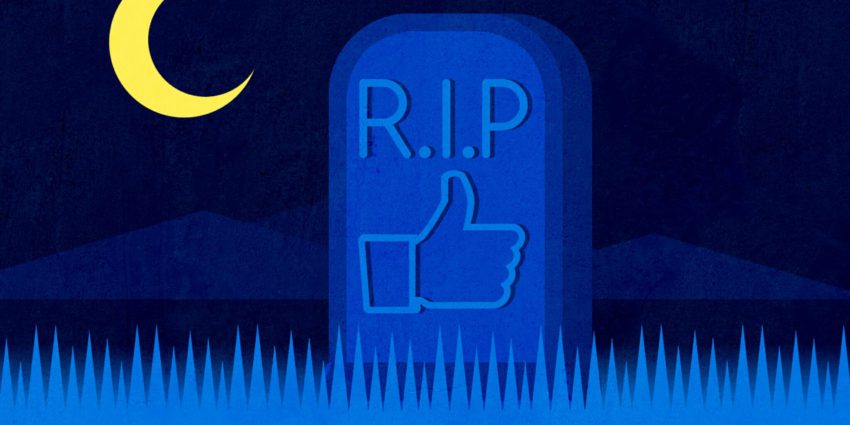 Facebook is dead. Is that kind of a bold statement? Maybe but it seems to be more and more of a real thing. I guess it depends on what aspects of Facebook you are looking at right? This article isn’t gonna be full of facts and figures just to warn you. I’m simply going to share my thoughts on how Facebook has progressed on my radar. And of course what I think about it these days. Which is for the most part Facebook is dead.

I could go back and look at the date I joined Facebook but I’m too lazy. What I do remember is that I’d been hearing about it around 10 – 12 years ago. I think I signed up for it and did a little looking around. Not knowing really what the deal was or how to navigate it I didn’t do much with it. Then I got my first friend request. It was from a Guy named Dan who had been in the same art class as me in our senior year of high school. There was a core group of 5 of us that made it all the way through the advanced art classes. Dan was a better artist than me. Needless to say it sparked a whole bunch of memories from high school. And being around 40 when I signed up it was pretty cool to see some of those folks in one form or another again.

I certainly couldn’t say Facebook is dead at this point! Things were just getting started. After Dan sent me the first friend request we were off to the races. It was a whole bunch of trying to chase down old classmates from back in the day. That’s really what Facebook was all about initially. At least to the people in my generation. It really gave us middle age folks a way to reconnect with people from the high school days that we had lost track of. Sometimes the results were good and sometimes not as good. The good times were when you reconnected with someone you missed and did a lot of catching up on their lives. Were they married, how many kids did they have, that sort of thing. Other times you found out things that weren’t as great. Your high school crush was in jail. Or someone you really disliked married someone you cared a lot about. Chances are numerous former school mates had passed away. Things like that. For me in general this was a pretty cool time to have Facebook in my life.

Could I say Facebook is dead at this point? Heck no! This was probably a few years after I discovered Facebook. I call this the golden years because Facebook became like this obsession. I feel like I was checking it constantly at this point. Numerous times a day, looking for new friends. People started wondering should you friend just actual friends? Was it okay to friend people you worked with? Should I friend my spouse, my kids? This was the years when Facebook really started becoming an everyday component of my life. I checked it all the time, obsessed to find out what was going on with people. It became a way to start making plans and coordinating things between people. To me it honestly felt like it became what I think it was meant to be, a community. It was a way to feel connected. And everything was good in the world.

In reality Facebook started with ads in November 2007. Doesn’t that seem like it’s wrong? Like it’s too long ago? I mean come on, that’s 12 years ago. Well that’s when Facebook started with the ads. What it SEEMS like to me is that the whole ads on Facebook became an in your face type of thing over the last 5 years or so. If you are a Facebook user I’m sure you’ve seen this type of situation which is total proof that big brother is watching us.

You look for jeans on Amazon. Or wherever, it doesn’t really matter. The point is you do some kind of shopping or research online. Fine, no big deal. The problem comes when you then log in to Facebook. And see ads for jeans or whatever you were shopping for earlier in the day. Or maybe even yesterday. The point is……somebody is watching and analyzing you. Ugh.

So here’s the primary reason why in my mind Facebook is dead. These days when I get on Facebook I see a mix of the following things. I do get to see the posts and updates of some of my friends. But other friends I never see anything. And it has nothing to do with how much they post or how much I like their posts. Maybe there is some kind of algorithm to it, who knows. The other stuff I see drives me crazy. It’s a combination of paid advertising, group post updates, and some friends posts. It’s like this weird smashed up stew that I find incredibly boring. Mostly it’s the amount of paid advertising that drives me crazy. Facebook is still good for some things, here’s an example.

In the last few weeks a good friend of mine from my college days passed away. We hadn’t spoken in a good 20 years but that doesn’t change the fact he was a huge part of my life back then. Through Facebook someone set up a group for him. The awesome thing was people shared photo’s and memories of him. This is a way that Facebook was really a good vehicle for sharing information and memories.

So can we say Facebook is dead? No, not really. It’s alive and thriving in many ways. I guess for me it’s boring in that it’s not exciting like it used to be. It has morphed into something different for me. Sure, sometimes I like to see people share moments in their lives they are proud of. Graduations, marriages, births, that type of thing. On the other hand I really dislike a week’s worth of posts showing kids holding up signs that state “5th grade”. Get’s old. I have also learned some great things through some of the community groups I am in.

I just need to remember to not join 50 groups!

Have a good one,