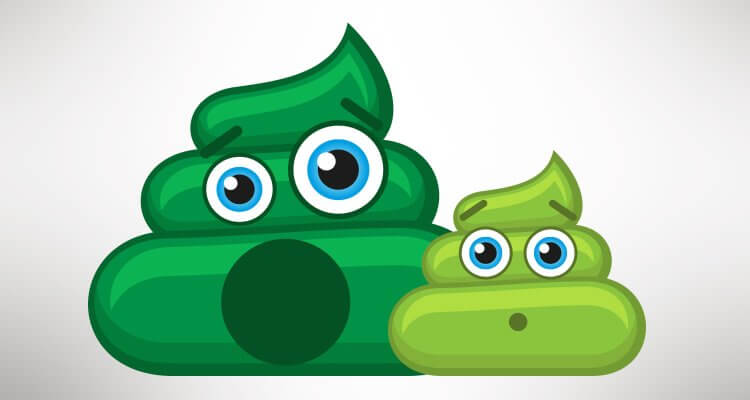 Come on, admit it. There’s been many a time when you’ve finished your business on the toilet. And then took a long look at what you produced. I’m sure sometimes you’ve been quite proud of your creation. Other times you’ve had to work extra hard with limited results. And then there are times when you can look down and be surprised. I know I sure have been. And every once in a while I’ll look down into the water and say how is my poop green!? If that’s ever been the case with you, you’ve come to the right place.

According to an article I read from the Mayo Clinic, and a few other sources, having different colors of poop isn’t cause for alarm normally. The Mayo clinic says that stool (I prefer the word poop) comes in a wide variety of colors. All shades of brown and yes, even green are typically considered normal. Stool color is typically heavily influenced by what you eat. The other big influence on the color is the amount of bile in you. As bile travels through your innards it is chemically altered by enzymes. In general the color of your poop shouldn’t be a cause for alarm. The only times you should really be concerned is if it is bright red or black. This can indicate the presence of blood and you definitely want to get that checked out.

So How is My Poop Green

Okay so now let’s look at some the reasons why you’d be staring slack jawed at the toilet bowl and asking yourself how is my poop green. The first reason is the most likely, and the healthiest reason.

You’ve Been Eating a Ton of Green Food

And by green food I am referring to broccoli, kale, wheatgrass, and spinach. Things like that. The reason why these types of food will make your poop green is because of chlorophyll. This is the pigment that gives these plants their green color. Not surprising eating a lot of food that has green dye in it will also turn your poop green. So when the green pigment or dye mixes with the bile that breaks down food it can make your poop vivid green. Not mention cause some scary dreams later!

Specifically it may be a viral, bacterial, or parasitic infection. So let’s review real quick what bile is because it factors in largely here. Bile is a bitter, greenish brown alkaline fluid that is secreted by the liver that aids in digestion. During the digestive process enzymes chemically alter the bile from it’s normal yellow green color to brown colored. If your bile is not able to break down properly it will often times remain closer to it’s yellow green color when it leaves the body in your stool. And when you have an infection or parasite many times those force your poop through your digestive tract faster than usual. When this happens your bile doesn’t break down and change as normal. And out shoots the green poop.

You Have Irritable Bowel Syndrome

What is it about that name? I guess I should be glad I don’t have it but the name irritable bowel syndrome has always made me feel funny. Anyway, it’s another reason why you might have green poop. IBS is a condition that messes with your large intestine. And when you are having a flare up it can lead to diarrhea. I have a hunch you know where this is going. When we have diarrhea the food being digested will get “processed” quicker. Basically it goes through our digestive tracts faster than normal which ones again means the bile doesn’t get broken down by the enzymes. And once again you’ll be like how is my poop green.

Your poop can be green if you have Crohn’s disease or ulcerative colitis. Crohn’s disease causes irritation in your digestive tract, mostly in the small intestine and the beginnings of your large intestines. Diarrhea is a major symptom of Crohn’s disease and as we’ve mentioned this will cause the bile to not get broken down as usual. Ulcerative colitis is inflammation and sores in the digestive tract. This is more commonly seen in the large intestine and the rectum. Like irritable bowel syndrome doctors aren’t really sure what causes diseases that lead to inflamed digestive tracts. If you are having ongoing stomach pain along with the green poop it’s probably time to see your doctor.

One other way that might have you saying how is my poop green is if you’ve had your gallbladder removed recently. The pear shaped organ is sometimes removed due to having gallstones. Gallstones are hard deposits of material that block the flow of bile. They also hurt like crazy. This is one of the most common surgeries in the US. Once your gallbladder gets taken out there’s no place for your body to store bile. Since this is the case your poop will have more bile in it, which as we’ve discussed leads to green poop. The lack of a gallbladder causes increased diarrhea which means things slide through faster. When things slide through faster more bile winds up in the final product.

Well boys and girls, there you have it. 6 reasons to your question how is my poop green. One of them is because you’re eating healthy. The others aren’t great but then again we are talking about colorful poop. In any event, the majority of the time there’s a reasonable explanation. Now just hope you don’t start seeing really strange colors circling your toilet bowl. Like purple or orange.

8 thoughts on “How Is My Poop Green”