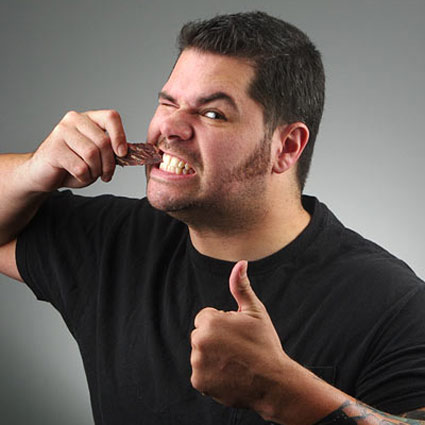 A few years ago I got on a beef jerky kick. Maybe I should rephrase that. I’ve always liked beef jerky. I read somewhere about how making your own beef jerky was fun and economical. So what did I do? I bought a food dehydrator and started making beef jerky. It was fun in some ways and kind of a hassle in others. At first I cut my own meat and that proved challenging. I then had the grocery store butcher cut the meat into strips and that was better although inconsistent. It was enjoyable trying different recipes and it was always a hit in my house. I’ve not made beef jerky for a few years but am looking at buying an inexpensive electric smoker. And guess what? You can make beef jerky in an electric smoker. Before I get started it’s probably a good idea to check and see is beef jerky bad for you.

First of all you noticed I said beef jerky in the title. It’s kind of like saying Kleenex instead of tissue. Sort of anyway. You can make jerky from lots of kinds of meat, not just beef. You can do turkey jerky. It’s also possible to make jerky from pork, bison, deer, kangaroo, etc. The point is you can make it from a lot of kinds of animals and meat.

In short jerky is a lean, trimmed meat that has been cut into strips and dried (dehydrated) to prevent spoiling. The word jerky derives from another word that means dried, salted meat. Most of the time these days jerky is marinated and also spices and rubs are added before the meat is dehydrated. The dehydration process is not unlike smoking. The meat is cooked with low temperatures, typically around 150 – 170 degrees fahrenheit, and dries out in the process. There’s lots of spices and rubs that can be placed on the meat resulting in a lot of different flavors.

How Healthy is Beef Jerky

So before we can answer is beef jerky bad for you we need to see what’s in beef jerky. And for the record I’m hoping that the outcome of this article is that beef jerky is good for you! I don’t want it to be bad for you because then I probably shouldn’t make any in my electric smoker I want to get soon. Anyway, according to the USDA, a typical one ounce serving of beef jerky contains:

That looks pretty positive overall right? Well yes and no. The low fat, low carbohydrate, high protein makes beef jerky a great lean snack. And tasty too right?! It’s usually a good source of iron as well. Now the bad news is that because it’s cured it’s super high in sodium. One typical ounce of jerky contains over 500 mg of sodium which is north of 22% of your daily recommended dosage. Yowser.

What Not To Choose

So like most other things in life you need to look for the healthier options. Beef jerky can certainly be good for you. That being said there are some things you don’t want in your beef jerky. Or any other type of jerky. Here’s some things to not choose whenever possible.

Now jerky is going to be salty, that’s a given. That’s a huge reason for why it’s great at lasting so long. That being said we should all keep an eye on our sodium, or salt intake. Remember, it’s all going to be high in sodium but some jerky is higher than others. Something to keep in mind.

Again, this yummy stuff in general is kind of high in fat. But typically it’s a good fat. Plus, and we’ve already mentioned this, it’s high in protein and low in carbs. Some jerky is higher in saturated fat than others. Keep an eye on the label to see what you’re getting.

MSG, otherwise known as monosodium glutamate, is an additive that makes us want to eat. It literally targets the part of the brain that makes us like to eat. It’s also known as chinese food syndrome. Junk food in general tends to have MSG sprinkled throughout it to get us to eat more and more. It’s not bad to eat jerky with MSG but there’s healthier options and you don’t really need it. So why eat it?

What To Look For

When possible it’s a great idea to look for the grass fed version. This is of course the more natural version. It’s cleaner and healthier and your body will appreciate it. For my last birthday my dad got me some grass fed pork steaks. When I grilled the first round I was simply amazed. The juiciest and tastiest pork I’ve ever had. And of course the price tag supported that.

It’s easier to put this as a general list of what to look for. Here’s what to keep your eyes out for if you like this stuff to make a healthy snack.

There you have it. This tasty stuff can actually be pretty good for you. The key like most things is to go as natural as possible. Read the labels and make an educated decision. Don’t eat it like a meal ever day, use it as a healthy snack. If you are feeling adventurous you can even make your own. It’s pretty easy actually, just takes a little time and patience. And if you’d rather buy it, like I usually do, here’s some suggestions for you.

12 thoughts on “Is Beef Jerky Bad For You”