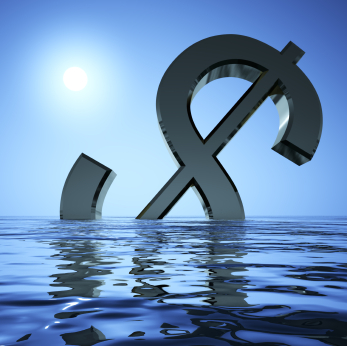 You’ve heard of a sunk cost right?  The sunk cost fallacy?  No?  Well that’s okay, most people I talk to haven’t.  I wrote a post not too long ago called “What is a Sunk Cost – And What It Means To You”. <— If you haven’t read it you should, it’s pretty good.  In general I talk about what a sunk cost is and how it can affect people.  It’s actually a business term but it’s easy to apply to everyday life.  In this article I thought it would be a good idea and expand a bit to show sunk cost fallacy examples.  Let’s take a look shall we.

Always a good idea to review the basics.  So let’s take a look at what a sunk cost is.  This will help us get a better picture of the sunk cost fallacy examples.  The term sunk cost has it’s origins in accounting.  Remember that as the base as we move forward.  According to Investopedia: “A sunk cost is a cost that has already been incurred and cannot be recovered. A sunk cost differs from future costs that a business may face, such as decisions about inventory purchase costs or product pricing. Sunk costs (past costs) are excluded from future business decisions because the cost will be the same regardless of the outcome of a decision.”

Let that sink in a bit.  What it boils down to is that any cost you’ve already spent cannot be recovered.  Therefore it should not be considered in the decision whether or not to move forward with something.  In other words, the past is in the past.  Don’t let the past affect your future decisions.

In order to full grasp and relate to sunk cost fallacy examples let’s look at the sunk cost fallacy.  It’s more common that you think.  Here’s a quote from an article written by Jamie Ducharme for Time titled “THe Sunk Cost Fallacy is Ruining Your Decisions: Here’s How: earlier this year.  The quote is “The sunk cost effect is the general tendency for people to continue an endeavor, or continue consuming or pursuing an option, if they’ve invested time or money or some resource in it,” says Christopher Olivola, an assistant professor of marketing at Carnegie Mellon’s Tepper School of Business and the author of a new paper on the topic published in the journal Psychological Science. “That effect becomes a fallacy if it’s pushing you to do things that are making you unhappy or worse off.”

Hopefully that makes sense.  Boiled down it means we continue to do things EVEN IF WE DON’T WANT TO because we’ve already invested something in them.  In the accounting/business sense it’s usually money.  For us individually sometimes it’s money but in many cases it’s about time invested.  You and I don’t want to give something up or stop doing something because we’ve invested our time in it.

Example #1:  The dating game (or marriage as well) is a classic example of the sunk cost fallacy in action.  The longer you’ve dated someone or been married to someone the harder it becomes to break it off.  Even if it’s not a healthy relationship.  Every month that goes by makes it harder and harder.  We don’t want to admit to ourselves that we’ve “wasted the time”. Example #2:  The food I ordered.  Since I paid $30 for my fancy steak dinner I better finish it!  Otherwise I’ve wasted the money.  Then I force myself to chew it all down and I feel miserable for the rest of the night.  The reality is I’ve already spent the money for the meal.  If I only eat half of it I’m not getting $15 back.

Example #3:  The movie I’m watching.  I’m 30 minutes into a movie that sucks.  Since I’ve already spent 30 minutes of my life watching it I better finish it.  Even if I feel my brain cells dying because the acting is so horrible.  Guess what bro?  You aren’t getting that 30 minutes of your life back no matter what.  Why waste another 90 minutes?

Example #4:  The class I don’t like.  So you paid $500 to go to a class or a seminar you thought would be great.  After attending a few times you realize it’s not at all what you thought when you read the description.  Yet you keep going because you already paid the money for it.  Guess what pal?  That $500 is gone, let it go.  Now all you’re doing is wasting your time continuing to go to the class.

Example #6:  The project I started.  Sometimes we all get excited about doing a project.  Maybe it’s finally getting our CD’s (whoever has those anymore) categorized and all neat like.  Maybe it’s starting to learn how to home brew.  Whatever, we get a burst of inspiration and decide we are going to do this!  We buy the stuff and dive right in.  Then we taper off.  Then a few months have gone by and we look at the messy area where our project is in and we say we have to complete it.  Why?  Because we started it!  We like to finish things.  Another sunk cost.  Secret tip, you don’t have to finish it.

How To Fight the Sunk Cost Fallacy

Now that we’ve looked at some sunk cost fallacy examples let’s think about how we can fight it.  It’s difficult because we are emotional creatures.  We get attached to our decisions.  We like to finish what we start, at least most of the time.  I know I sure do.  Here’s how to fight the sunk cost fallacy.

Be aware:  Being aware of anything is the first step.  Now that you know what some sunk cost fallacy examples are, be aware when you face one.  When you order that gigantic meal tell yourself you are fine if you don’t finish it.  You’re going to go for it anyway!

Being wrong is okay:  A huge reason we get stuck in a sunk cost fallacy is because we don’t want to admit we were wrong.  Like I don’t want to admit I bought a lemon of a car.  Tell yourself everyone makes mistakes, and it’s okay to be wrong.  I’ll start.  I am wrong about at least one thing every day.  See, that wasn’t so tough.

Consider future value:  If I’m halfway through a crappy movie and I don’t want to finish it, I’ll tell myself to think about what I could do with the hour I gain back.  Same thing with investing money in something.  If I have a choice to throw more money at it tell myself to think about what else I could buy with that money.  You can’t spend money twice.  Although it would be awesome if you could.

Be smart:  Smart people know when to quit.  They realize there’s a point in time to stop doing something that isn’t working, no matter what they’ve invested in it.  Whether that’s $1 million or 20 years on a relationship.  Know when to fold em.

Well, we’ve taken a long look at what a sunk cost fallacy is as well as sunk cost fallacy examples.  It’s easy to see how we get absorbed in continuing to do something even if it isn’t working for us.  It’s how we are wired.  We have to consciously be on the look out for when the sunk cost fallacy rears it’s head.  And be aware of our alternate choices.

Although money doesn’t grow on tree’s it is replenishable.  Time on the other hand only goes around once.  Use it wisely my friends.