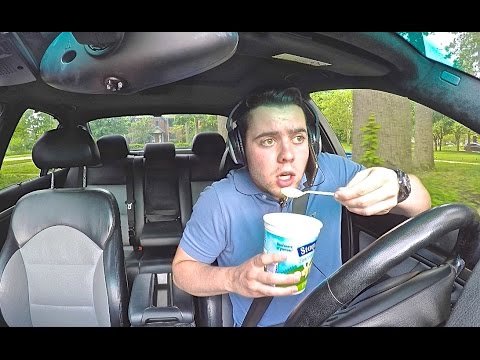 Is it just me or does there seem to be tons of bad drivers on the road lately? I mean seriously. Just about every day I am on the roads I think this to myself. The other day I about had a melt down of epic proportions due to the sheer volume of horrible driving I was seeing. People swinging across 4 lanes of traffic to take an exit at the last minute. Others driving so close to the car in front of them they appear to be attached. I saw a car that appeared to be driving itself because the driver was sitting so low. Makes you wonder if any of these people ask themselves why am I such a bad driver?

I almost wrecked with a guy in a white pickup who blew completely through a yield sign. We had a serious screaming match while he kept insisting there was no yield sign. Except the one 20 feet behind him. Absolutely nuts. So where do these people come from? If I was any of these people I’d be asking myself why am I such a bad driver? Like constantly.

I’m On My Phone

Hardly a shocker right? I was doing some research and came across some seriously depressing statistics involving phone use and driving. Most of it is referenced to texting so lord only knows how much it is when you add in all the other cell phone related stuff. The easiest statistic to hold onto is that 1 in 4 accidents in the U.S. are caused due to texting when driving. Does that surprise you? Probably not, it didn’t me. But it did depress me. If you want to make your day even darker read the article here titled “The 25 Scariest Texting and Driving Accident Statistics”. Put away the phone and grab a tissue.

I know I have thought to myself why am I such a bad driver more than a few times when my distraction to my phone almost caused an accident. Actually, now that I think about it a few years ago it did. I was at a stop light behind a few other cars. I was doing something on my phone and I must have eased the pressure off the brake because I gently bumped into the car in front of me. Thankfully the guy in front me was totally cool about it. Whew!

I Make My Own Rules

I’ll be dipped in pig stink if that guy did not slam on his brakes and screech to a stop. So you know what I did? I stopped right by him. He rolled his window down and so did I. I asked him (in a loud voice) if he saw the yield sign and at first he said “There’s no bleeping yield sign there”. When I told him to turn his fat head and look he then told me there was no law stating you were supposed to slow down for a yield sign. That dude never asks himself why am I such a bad driver.

I may be sleeping on the coach for a few weeks for writing this one. This is something I accuse my wife of on a regular basis. She’s looking for something in her purse. No, wait, she’s changing the station on the radio. What, there’s nothing good playing on the radio? Better hook up my phone and look through my playlists. Well darn it now it’s too hot in here, I’d better check what the temperature is. Now my seat seems to have been moved up closer to the steering wheel. Did you do that again? No honey, I haven’t driven your car this week. Well SOMEBODY has moved my seat again and I can’t get comfortable.

It’s like this the entire drive to anywhere. You feel me?

I’m In My Own World

This is something that I see on a regular basis and not just in cars. People that seem to be completely in their own world. You see it everywhere. I travel on a regular basis for work. Know what I see in airports and on planes? People with headphones on staring at a laptop or their phones. Look I get that some of the time, I have sure been known to watch a movie on airplanes. That being said I don’t tune out the entire world and make a bubble around myself like I see these days.

This carries over to driving as well. Another reason why someone might be asking themselves why am I such a bad driver is because they don’t pay attention to what’s around them. They are too focused on being inside their own little bubble of music or vaping or whatever. I always tell my daughters most of the time it’s not your own driving you have to be as worried about. It’s all those distracted drivers who seem to be in their own world

Finally one more reason you may ask why am I such a bad driver is that you simply don’t care. Here’s a close to home example. Sometimes I bravely ride in the passenger seat with my 16 year old daughter. As soon as we get on the highway she slides on over into the left lane. When I ask her why she said she will have to either get off the highway on the left (to her work) or eventually she will want to pass someone. When I state neither of those things are happening now she’s like “Whatever, I don’t care”.

She’s what I would term a lite example. There’s lots more people out there who take it to more extremes. Many other people who if they want to know why am I such a bad driver it’s because they simply don’t care about others. They do what they want when they want. That could be the person that is driving oblivious to anyone else to the person that cuts you off. It’s their world, you and I just live in it. Get over it.

Look, the reality is there’s a lot of bad drivers out there. If you find yourself asking why am I such a bad driver take a look at the list and see if any of them apply to you. It might be that one of them resonates with you and it’s time to make some changes. If you don’t that’s up to you. Maybe you just don’t care.

But hopefully you do – in good health,

2 thoughts on “Why Am I Such A Bad Driver”