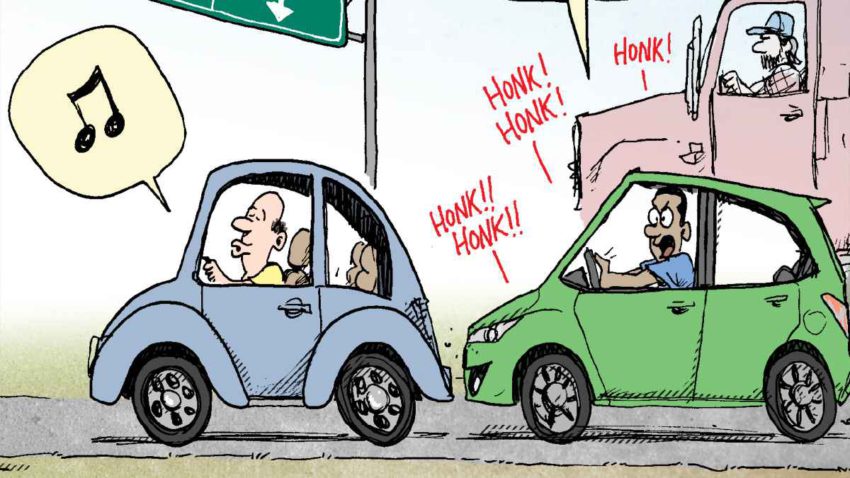 Now I know people seem to drive worse these days. It’s not just me becoming a grump old man. At least I don’t think it is. Well it can’t be all the time. Especially when I pass someone on the road and they are looking at their phone instead of the road. Which makes me wonder if it’s possible to actually keep statistics on the percentage of crashes that are caused by phones. Or people’s eyes looking at their phones instead of the road. One of this past season’s Black Mirror episodes was about that. Anyway, I am beginning to digress. What really rubs me the wrong way is the number of people that obliviously cruise along in the left lane. Why do you drive in the left lane?

So here is the reason for why do you drive in the left lane is coming up now. A few weeks ago my younger daughter and I went to get lunch. She has had “limited” driving privileges the past month or so due to a few “incidents”. So I let her drive us to lunch. Once we got on the highway it didn’t take long for her to slide on over into the left lane. She wasn’t doing it to pass anyone, she just moved over. And of course I asked her why do you drive in the left lane right now? Her response to me was that she was going to have to take a left exit. And I said well that’s true but that’s in like 4 miles. What? Okay, whatever.

Then coming back from lunch she again got in the left lane for no apparent reason. When I asked her why this time she said she was going to pass someone. To which I said there is literally no one in front of you for the next half mile. She said back to me that eventually she’ll have to pass someone. Okay, now that’s pushing the envelope. Come to find out she generally just drives in the left lane for no real reason.

So according to Missouri Revised Statute 304.015 “On highways with a total of four or more lanes (two or more lanes in each direction), a driver is mandated to drive in the right lane unless passing slower traffic, letting another driver have enough room to enter the highway safely, or preparing to make a legal left turn.  Once you have completed the pass, Missouri law REQUIRES you to return to the right lane.  It is not legal or safe to continuously drive in the left lane.”

Maybe I’m crazy but this seems pretty clear to me. This is what I remember from my days of learning when to drive on the highway and passing and all that stuff.

Going back about 20 years ago I worked for Kinko’s. Yes, the copy place. At least it was back then when I was a manager. Anyway, one of my assistant managers and I had to drive to Tulsa for a regional meeting. It was about a 4 hour drive from where we lived. Being the nice guy that he was he offered to drive. So why not, I’ll take the time off from being being the wheel. So as we are settling in on the highway I notice he gets in the left lane for no real reason. And he stays there. And stays there.

What makes this even worse is he actually goes less than the speed limit. Pretty soon people are getting right on his rear bumper. Then honking starts to happen. And then passing us on the right. And flipping us off. He seems completely unfazed by any of this. When I ask him does he notice the people honking at him and flipping him the bird he’s like, yeah, kinda. And then he says that it happens all the time and aren’t people jerks. When I try to educate him that he’s not supposed to stay in the left lane he looks at me like I have 2 heads. He says he’s never heard that before and it’s not anything he ever learned about. Then he proceeds to drive the next 3 hours in the left hand lane.

So why do you drive in the left lane? Look, I was taught and Missouri law backs me up as you just read. You drive in the left lane when you want to pass someone or there’s an upcoming left turn. This is left lane driving for the highway smart guy, not just any old road. It’s not rocket science. My guess is that people in general are becoming more oblivious to this and other driving guidelines and rules, probably because of phones. Like my daughter that thumbs through music on her phone after every song when she is driving.

So come on people! Let’s remember the things we were taught when we learned how to drive. And one of those is use the left lane for passing!

So ends my rant – thanks for listening.